Thanksgiving 2015: Off to Dubai 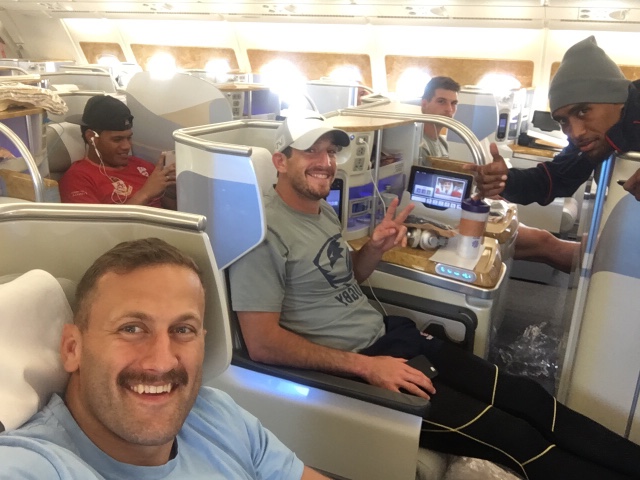 (Flying Emirates Business class is like nothing else!)
In all honesty, to my surprise, I was named to the squad that will participate in Dubai and South Africa to start off the World Series.
http://usarugby.org/mens-sevens-news/item/dubai-cape-town-eagles-chosen-for-2015-16-series?category_id=3
Surprised becuase there are some really quality players on the squad and I wasn't sure how the coaches would do selections: reward the players that have been training together for a long time or give an opportunity to a player new to their system, that has a strong potential to get better. I'm not saying I didn't think I deserved it, I obviously did enough to earn that spot. My enthusiasm grows each day because I know the longer I'm with this group training, the better I'll become.
So that's that, Happy Thanksgiving to everyone! I'm on my way to Dubai, thinking of everyone enjoying good food and good company.
Posted by Kevin at 11:08 AM No comments:

Anyone that has ever tried out for anything, sport or otherwise, knows that the feeling of "anticipation" the day before the team is announced can be almost unbearable.
As I'm laying in bed thinking about my performance this week, there's been massive growth. Sure I have thoughts of, "where I could've been better" and the, "where I did pretty well," which all get replayed in my head; but what I know is this has been so massively rewarding to be a part of. I love the dog-fight nature this requires of us. Passion, HA! It's almost like that's an understatement if you use that word as a requirement to play this game. It's more like an ideology is being required.
Nonetheless, it's pure beauty to be involved again and I can have no more influence on whether I'm named on the team or not...So I'll lay my head down, rest, and enjoy the anticipation.
Posted by Kevin at 10:36 PM No comments: 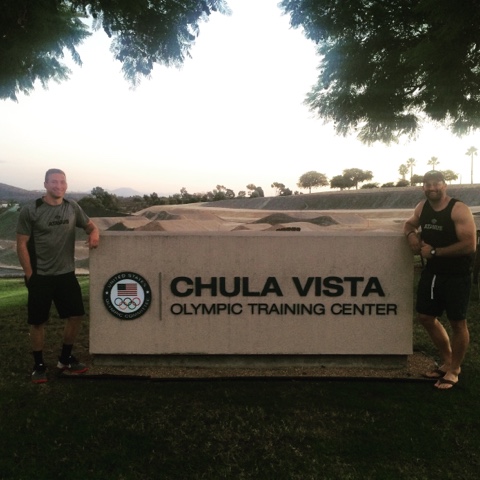 Here with my Seattle/Atavus teammate and good friend, Pete Tiberio, as we challenge for a place with the US team during the first two tournaments of the year (Dubai and South Africa).
We're two days into it and it's been a very good camp so far. Wow, these three-a-days are no joke! The legs were a bit heavy during our last session today and tomorrow is nothing short of an absolute grind. We a "yakayard" tomorrow morning, which has become infamous for the hardest hour of fitness you'll ever do. Followed by a late morning field session and finally scrimmages for the first time this camp. They're here to challenge us mentally and physically and succeeding quite well if I might say.
But nonetheless, I'm sooooo excited to be part of this system, with these coaches and these players.
The next few days will be a telltale sign of what's to come, definitely eager, a tad bit nervous, and definitely ready for it!
Ciao for now.
Posted by Kevin at 9:38 PM No comments: 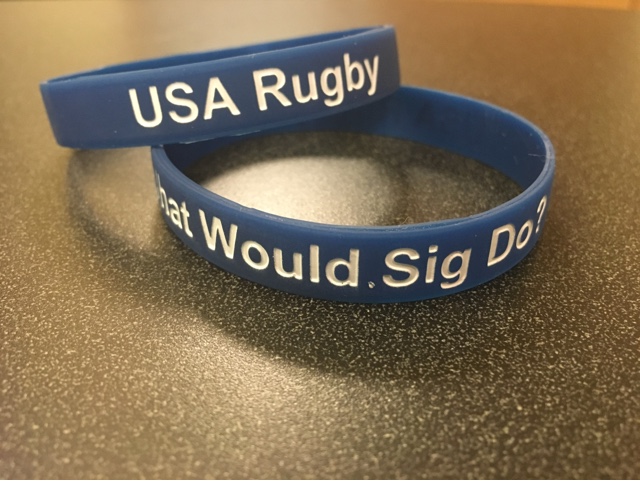 I posted on FB on 11/1 about growing a Mo for Movember and wanting to raise money for a foundation that has helped many through a challenging fight against Sarcoma cancer, like my friend Sig.
I want to do more than a simple post so here is my plan and I hope you'll be involved. I made wristbands to show my support of him, as well as a reminder to myself during any difficult times - whether in my pursuit for the Olympics or in life itself, it reminds me that although things are tough, it's all relative.
So can we raise some money!? I will personally send a wristband to the first 50 people who donate $50 or more to https://nwsarcoma.org/about/how-to-help/donate. (just private message me once you've donated). Also, I'm not just all talk and will be donating a fair bit of dough myself.
Why is he my inspiration?
Throughout the past 22 months he competed in an Ironman, Lavaman (Olympic distance triathlon), and sprint triathlon. He regularly participates in touch rugby and goes to the gym, sometimes two days after chemo treatments! He hasn't let this cancer stop him from doing what he loves. He doesn't let any challenges prevent him from competing or just simply living.
This has been his journey:
-December of 2103 he was training for an Ironman, and found out he had cancer.
-Jan - April 2014 underwent first round of chemo.
-In April 2014, STILL COMPETED IN IRONMAN (even though the chemo caused neuropathy in his hands and feet and lost 50% use of his hands)
-May 2014 radiation began
-June - Dec 2014 further chemo and radiation because first round was ineffective
-Jan 2015, cancer is gone in treated area, but three new tumors arise
-March - August 2015 another round of chemo, every three weeks
-Sept -Nov. Radiation
-Nov 2015 three tumors are gone, but one new tumor arises.
-Has just began 3rd round of radiation as he fights off the new tumor in hopes to avoid more chemo.
Here are the stats:
-65 radiation treatments
-55 separate chemo days
-20 hyperbolic treatments
-2 blood transfusions
-3 triathlons completed
Posted by Kevin at 9:42 PM No comments: